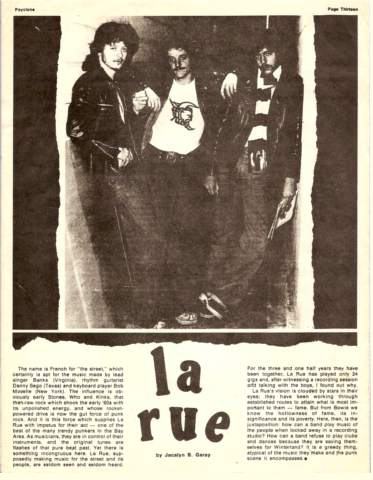 "LaRue: a singer-songwriter trio backed by numerous talented and often legendary local musicians during the band's trail-blazing history. Smug? Yes. Arrogant? Yes. Know all the words to In Held 'Twas in I? Yes. Kick your f*ckin' ass? Affirmative.

"Sandwiched in between the days of disco and punk, LaRue was very well-known throughout the Northern California area. You simply needed to look out the window while driving through San Francisco to see the graffito, 'LaRue Rocks', painted on many a wall, or turn on KSAN where the band might be chatting with the DJs and where LaRue's first single, Clowns , rocked the Bay Area's airwaves.

--from The Palers' Project , a loose international collective of fans of the band Procol Harum who record the songs of Gary Brooker, Matthew Fisher, Robin Trower and Keith Reid for their own and others' pleasure.